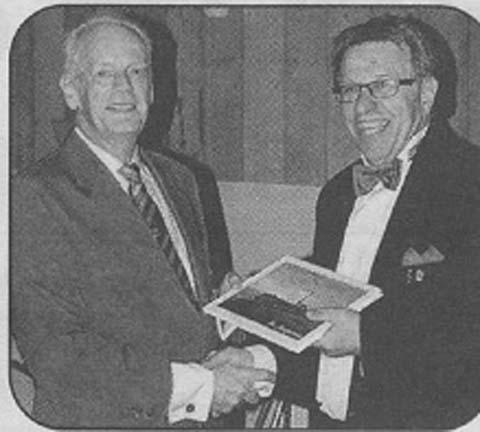 oice Choir returned from its recent visit to Gouda, Holland, laden with cheese and happy, enduring memories of a wonderful trip.

Choristers and supporters alike agreed that the visit had been excellent in every respect. Each day presented an insight into life around the town of Gouda. A visit to a cheese farm where the famous Gouda cheese is made was followed by a tour of the world-famous windmills at Kinderdijk, where some of the party strolled and others successfully joined the throng of cyclists in completing the circuit. A final visit to Rotterdam, one of the largest container ports in the world, completed the visits, throughout which an interesting commentary was given in perfect English by Rob Koopmans. Joop Meijers, vice-chairman of the Gouda Liedertafel choir, was also in attendance. On Friday night, Barry Male Voice extended its commitment to serving the wider community, this time in Holland, by singing at the Korte Akkeren Residential Home, where the choir was enthusiastically received by the large audience.

Saturday night's concert was undoubtedly the highlight of the visit. The venue, a Dutch Reform Church, provided a theatrical backdrop flooded in light. The capacity audience revelled in an evening of male voice singing at its best. Rousing choruses, Welsh hymns, and subtle harmonies were sung in turn by both choirs, all to rapturous applause. The unannounced rendering of 'Myfanwy' in Welsh by the Gouda Liedertafel Choir delighted and surprised the Welsh part of the audience. The emotional excitement was raised even higher when, again without warning, the Barry Male Voice sang 'Het Lied van Zuid Holland', a folk song of the area, in Dutch. There followed a standing ovation to remember, an explosion of applause which resonated around the church. The shared musical bond between the two choirs was further cemented when a joint rendering of 'You'll Never Walk Alone' was conducted in part by Han Louis Meyer, musical director of Gouda Liedertafel, and Dorothy Connell, musical director of Barry Male Voice Choir. An afterglow involving the two choirs, their friends and supporters continued at the Ons Dorp restaurant well into the night, where presentations were made by Barry Male Voice Choir chairman Gareth Roberts to Gouda Liedertafel Choir on behalf of the Mayor of the Vale of Glamorgan, Coun Eric Hacker and the Mayor of Barry, Coun Les Sword.

Chairman Gareth Roberts added: '"The choir's visit to Gouda is already a memorable experience. It has been an honour and a pleasure to share in the 90th anniversary celebrations of the Gouda Liedertafel Male Choir. We are indebted to the Gouda choir and officers for the warmth of their welcome, and hope that sometime in the future we can reciprocate by welcoming them to Barry. "Long may this particular Wales and Holland link continue! "I must also pay a tribute of thanks to Jenny Edwards for her part in organising the visit, coaching the choir in its Dutch pronunciation and for being our compere and interpreter. "A final tribute must be paid to our talented musical team, accompanist, Emma Arscott and musical director, Dorothy Connell, who again have ensured the highest level of performance from the Barry Male Voice Choir."